Why we need Saint Michael the Archangel 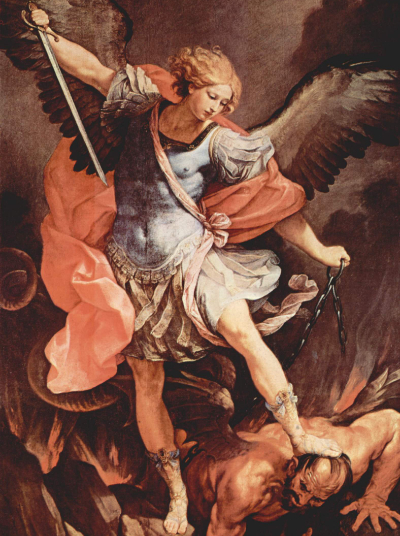 Thomas Aquinas wrote that angels had such a great wish to help people that we cannot even imagine. St Michael wants to help us for free, for nothing, but he acts like a gentleman, he respects our free will. Only when we call on him, does he act with exceptional power and wisdom.

Why do we need St Michael? First of all, for a spiritual battle. We are at war. We don’t sail on a cruiser but on a battleship. We’re not tourists, we are pilgrims. We came from God and go home, to heaven, to God. Angels are to protect us on our way home because we have an enemy. It is Satan and the other fallen angels. Look at the statue of St Michael. It is a copy of the one from the miraculous grotto in Gargano, Italy. This statue is a victory monument. Look, the evil spirit is defeated under the foot of St Michael. He was defeated, he is defeated and will be defeated by St Michael. St Michaelencourages us to make friends with him because he wants to give us his strength to become a winner.

At the beginning, a group of angels rebelled against God. Their leader was Lucifer with his calling “I won’t serve”. They are in a state of hell. They are losers forever and now they do everything to entice people. They are jealous of us, of our dignity. They don’t want us to get places in heaven. They lost their place in heaven by their own conscious and purely voluntary decision.

Christ tells us about Satan and hell, explaining his methods of activity. Moreover, Jesus is tempted but He overcomes all the temptations. Christ is victorious and invites us to be victorious too. He reminds us like He reminded the Apostles: “Stay awake, and pray not to be put to the test” (Matt 26:41). He also teaches us the Lord’s Prayer with two important requests: “And lead us not into temptation” which means “grant us strength to fight a temptation” and “deliver us from evil”. We say these requests in plural form. It means that we pray for ourselves and for others. In the Catechism of the Catholic Church we find the words “Devil” and “Satan” written with a capital letter. These are the names of a mysterious being rebelling against God. So the world of evil spirits consists of Satan/Devil and other fallen angels called demons. Demons are always in plural, they belong to the kingdom ruled by Satan; they are at his disposal and take his orders. Lateran Council IV stated that demons were created by God as good angels, good by nature but, they become evil by their own decision.

This is the reason we need to remember that we are at war. St Faustina wrote that she began the day with a fight and she ended it with a fight. As the Word of God says: “Keep sober and alert, because your enemy the Devil is on the prowl like a roaring lion, looking for someone to devour” (1 Peter 5:8). On the one hand, we cannot exaggerate the significance of the Devil and his activity. Yes, he exists. Yes, he acts but, he was defeated. On the other hand, we cannot ignore him at all. What we need is common sense and a healthy balance.

Christ gives us a proper perspective: “Be courageous: I have conquered the world” (John 16:33). Don’t be afraid of sin, hell and Satan because it is Christ who triumphs. We read in the Catechism of the Catholic Church (CCC, 395): “The power of Satan is, nonetheless, not infinite. He is only a creature, powerful from the fact that he is pure spirit, but still a creature. He cannot prevent the building up of God’s reign. Although Satan may act in the world out of hatred for God and his kingdom in Christ Jesus, and although his action may cause grave injuries – of a spiritual nature and, indirectly, even of a physical nature – to each man and to society, the action is permitted by divine providence which with strength and gentleness guides human and cos- mic history. It is a great mystery that providence should permit diabolical activity, but ‘we know that in everything God works for good with those who love him’” (Rom 8: 28).

The word ‘mystery’ is significant in this passage. Both activity and the silence of God is a mystery. It is also a mystery why God allows Satan to act within the world. He could have sent him to another planet. Some Fathers of the Church say that God keeps Satan in the world to rebuke him because a man, so little and fragile in comparison to an evil spirit, can defeat him by the power of God.

The power of St Michael

St Michael the Archangel is an exceptional helper in a spiritual battle. We read in the Book of Revelation: “And now war broke out in heaven, when Michael with his angels attacked the dragon. The dragon fought back with his angels, but they were defeated and driven out of heaven. The great dragon, the primeval serpent, known as the Devil or Satan, who had led all the world astray, was hurled down to the earth and his angels were hurled down with him. Then I heard a voice shout from heaven, ‘Salvation and power and empire for ever have been won by our God, and all authority for his Christ, now that the accuser, who accused our brothers day and night before our God, has been brought down. They have triumphed over him by the blood of the Lamb and by the word to which they bore witness, because even in the face of death they did not cling to life’” (Rev 12:7-11).

St John wrote this text inspired by the Holy Spirit; he was then an old man living on the island of Patmos. He had private visions that became public ones that were written in the Bible. We’re going to read them till the end of the world. What did St John see? He saw some ancient battle at the very beginning of the world. The battle did not take place on earth but in heaven. It was between two teams, two armies: St Michael and his angels and Satan and his angels. Leadership of St Michael and Satan is emphasised, they both had their angels. The battle was rather short, no rounds, no overtimes, no penalty kicks like in football matches. God uses St Michael and his angels to remove all fallen an- gels from heaven. They were hurled down to the earth, what does it mean? They live in the state of hell but it is open; that’s why they have access to us, people, on earth. Hell will never be closed.

Hell is not a place you can lock. Satan wants as many people as possible to join him in hell. We need to be aware of that fact. He attacks people usually in their weakest points. And he does not act alone. Christ says he takes seven more demons and they all attack a soul. That is why when he tempts us it is worth calling St Michael. We can do it by the prayer of Pope Leo XIII, written after one of the visions he had in a chapel in St Peter’s Basilica. We’re not sure what exactly Pope Leo XIII saw but we have his prayer that is well-known and said in various languages all over the world. Originally it was in Latin.

Let’s look at the passage again: “They have triumphed over him by the blood of the Lamb.” Yes, this is the blood of the Lamb which triumphed over evil. It washes our sins away and Christ feeds us with His blood when we receive HolyCommunion. It is His blood, thanks to which we win over evil spirits. St Michael is a great protector in this spiritual battle. The experience of the saints proves this fact: St Faustina Kowalska, Bl Fr Bronisław Markiewicz, Joan of Arc, St John Vianney, St Padre Pio, and many, many more.

Let’s come back to St Faustina Kowalska, the Apostle of Divine Mercy. She encountered St Michael the Archangel only once in her lifetime. It was on 29th September, St Michael’s feast day in the Catholic Church. She recognised him. She did not write down his looks but his words: “On the Feast of Saint Michael the Archangel, I saw by my side that great Leader, who spoke these words to me: ‘The Lord has ordered me to take special care of you. Know that you are hated by evil; but do not fear – Who is like God!’ And he disap- peared. But I feel his presence and assistance” (Diary, 706).

We need to be aware of this: if we do something for God, we are hated by evil. Evil spirits want to interrupt and draw us away from doing God’s will. But they cannot hurt the head so they attack the heel, some weak points. We are defended. StMichael the Archangel takes special care of us. Our guardian angels take care of us on a daily basis. It is their regular job.

Do not be afraid

St Michael’s care is extraordinary because this is his mission given to him by God himself. And he assures St Faustina: do not fear – Who is like God. Sometimes we are oversensitive or overwhelmed by fear, we may de- monise reality. But St Michael says: “Do not be afraid.”

Then he disappears but she feels his presence and assistance. We want to feel the same. You’re finishing reading this article but St Michael stays by your side. If you invite him, he will let you experience his powerful, sweet and effective presence. You can always rely on him.

From the The Angels Magazine

If you have experienced the help of St. Michael the Archangel in Your life, do not hesitate, share it with others!
PrevPreviousHoly Trinity for Dummies
NextNovena Reflection Day 1 (Sep 20)Next